Matt Bernard has subspecialty training in hip and knee reconstruction, has authored multiple articles and has presented at local and national conferences. He is Chief of Orthopaedics at CHI Memorial Hospital and is committed to alleviating pain in those with degenerative joint diseases of the hip and knee. 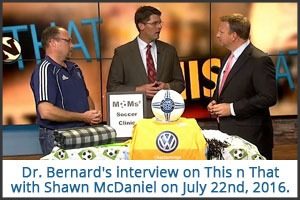 As a native of California, he grew up water skiing and hiking in the southern Sierra Nevada Mountains. In high school, he played football and baseball; ultimately finding his way to The University of Alabama, Tuscaloosa as a pitcher. At Alabama, Dr. Bernard was a member of the 1997 team that played for the National Championship in the College World Series. Off the field, he earned bachelor’s degrees in Chemistry and Biology plus a graduate degree in Exercise Physiology.

He attended medical school at the University of Tennessee in Memphis. While he began the first few months of his postgraduate training at Tulane, Hurricane Katrina brought him back to Memphis to complete his surgery internship and orthopaedic residency at the Campbell Clinic in Memphis. In residency, he assisted in the care of the St. Louis Cardinals’ triple-a affiliate serving as an on-site team physician. He left Tennessee for the adult reconstruction fellowship at Stanford University in Palo Alto, CA, where he was an Omega Grant recipient and served as a clinical instructor in their residency.

After a year in California, Dr. Bernard returned with his wife Sarah to her home on Signal Mountain where they are raising their children Nolan, Caroline & Lilly.